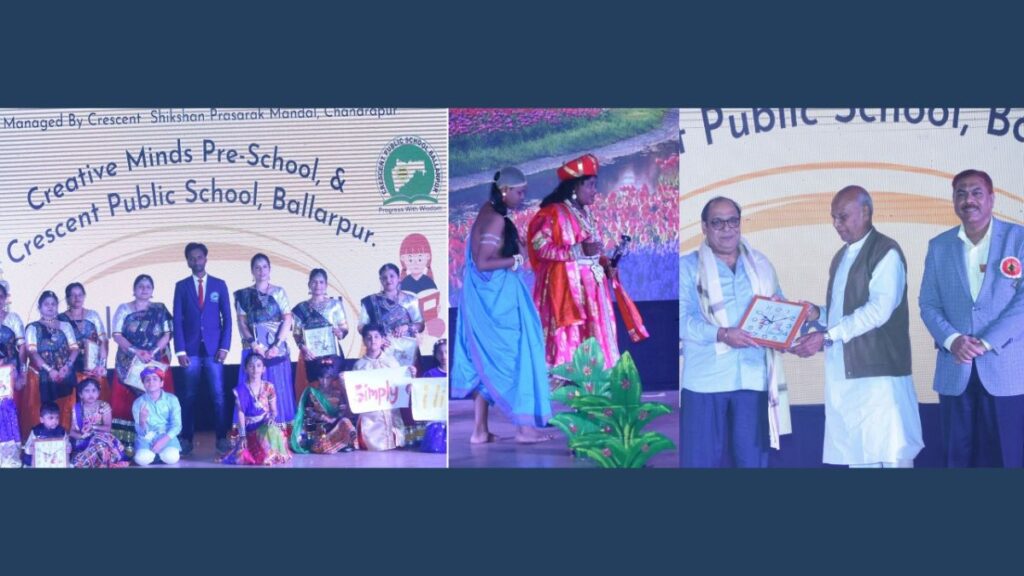 The program was presided over by Dr. Z. J. Khan (Principal Rajiv Gandhi College of Engineering Research and Technology Chandrapur, President Crescent Shikshan Prasarak Mandal Chandrapur), and the program was Inaugurated by Mr. Chandan Singh Chandel (Ex. President FDCM, Government of Maharashtra). The annual festival was very successful and purposeful. The program was organized on the ‘Tenali Rama’ theme. The timing of the program was 1.30, but the students and parents were present on the premises before time. There was enthusiasm in all.

The Graduation Ceremony of UKG children were organized in which all parents and children shared their speech and experience. Certificates and mementoes were given to the children present in the graduation gown by the guests. The parents and students enjoyed the program and encouraged the children.

The children of LKG and Nursery presented a dance in the program. Seeing their small children dancing, there was a smile on everyone’s face.

Fancy Dress was presented by children who came in different costumes, dressed in police, soldiers, and representations of different states were presented.

Not only the children but their mothers also enthralled everyone with their dance at the ‘Festival Of India’ and supported the #ilivesimplymovement campaign initiated by Mr. Sonam Wangchuk (3 Idiots fame), Ladakh. School students presented many excellent dances, Holi song by class 1, Meri Maa by UKG, a Bahubali song by LKG children, a song dedicated to farmers by class 2 students, Girls of class 3 and 4 Nagada sang dhol, class 5 and 4 girls Arabic song, Semi-classical dance by class 7 students, Punjabi dance by class 3 students.

Sankrunti Khandelwal of class 6 was presented a bicycle by the School Director, Advocate Nazim Khan Sir, for her excellent performance in ‘Kick boxing’ at the division level.

Eminent doctors of Ballarpur were invited as guests of the program Dr. Jaidev Puri, Dr. Jaiprakash Tumble, Dr. Shyam Hivarkar, Dr. Kailash Malu, Dr. Garima Rathi, Dr. Ankita Waghmare, Dr. Ritesh Pimpalshende were present. The doctors were felicitated by the School with the hands of the guest for their selfless service.

President of Program Dr. Z. J. Khan, in his speech, explained to parents about ‘QIP’, Quality, Interest, and Perseverance can lead to making a good asset to the Country Mr. Chandan Singh Chandelji, Ex. President FDCM, Government of Maharashtra, congratulated the children on completing 10 years of school and made the children aware of education. The Director of the school, Advocate Nazim Khan Sir, mentioned in his speech about starting ‘After School Sports’ classes for the children, the Financial Health Program, and the Live Simple movement initiated by Mr. Sonam Wangchuk. The vote of thanks was given by Mrs. Roshan khan. The children, teachers, and parents have their tireless efforts to make the annual day of the school a success.

With Sanjay Dutt on board, CricAdda is poised for even greater success in the online sports and fantasy gaming industry