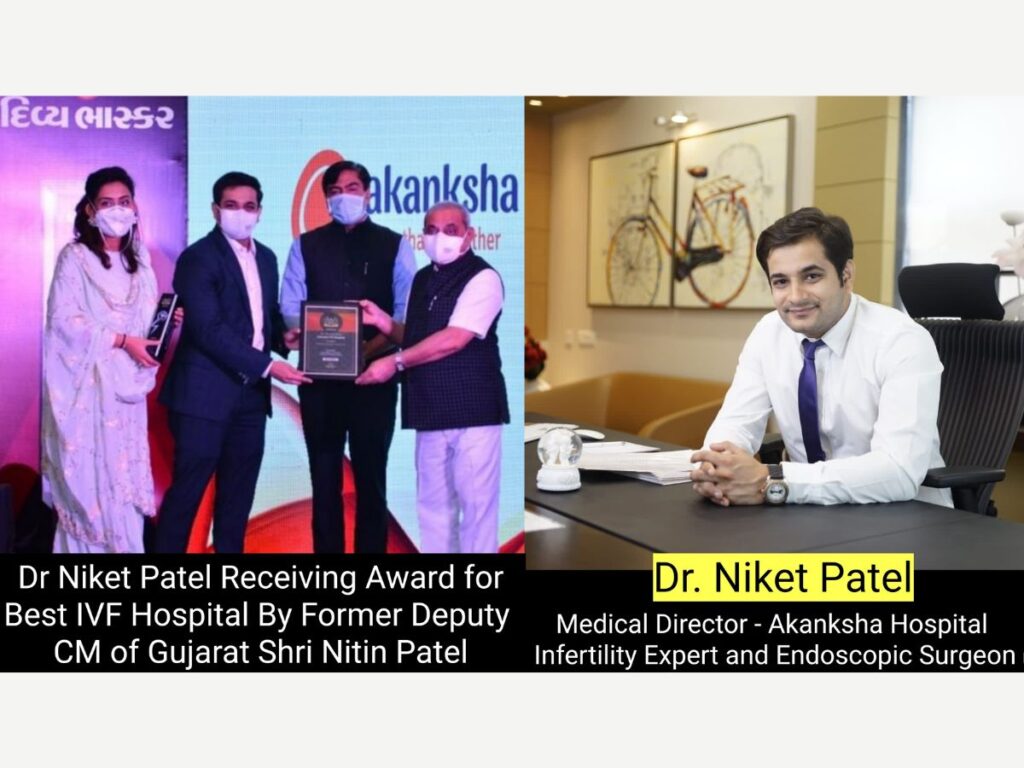 Dr Niket Patel, the son of highly acclaimed IVF expert Dr Nayana Patel—founder of Akanksha infertility facility known as the “Baby Factory” of India, which has produced over 25,000 IVF babies—specialises in sophisticated laparoscopic operations and is one of the country’s youngest to do so. Endoscopic procedures, often known as keyhole surgeries, can identify and treat most gynaecological abnormalities such as fibroids, endometriosis, PCOS, ovarian cysts, and so on.

Ovarian tissue activation was first performed by Dr Niket Patel in India. Dr Patel was first exposed to this method in Copenhagen, Denmark, where it immediately piqued his interest. He subsequently conducted significant research into the method before implementing it into his practice. As of that time, it had only been accomplished in a select few nations, including Denmark, Japan, the United States of America, and two others. Dr Niket and his team have successfully activated ovarian tissue in over 25 patients in India, resulting in 4 live births.

The Ovarian Tissue Activation procedure involves a little piece of the ovarian cortex being removed, mechanically stimulated, and re-transplanted into the peritoneal pocket close to the ovarian ligament. To avoid having to use donor eggs or embryos or to remain childless altogether, this is sometimes used for women with a decreased ovarian reserve or whose ovaries are not generating their eggs. Because of this, a woman’s ability to have biological children may be enhanced, as her ovaries will operate better. It is urgently required because of the meteoric rise in the incidence of early ovarian insufficiency and low ovarian reserve in India.

Dr Patel dispelled the idea that “IVF is a women’s issue” by stating, “No, infertility is as much a male-related issue as it is a female-related issue.” Indeed, the incidence of male infertility has skyrocketed during the past decade. In my experience, most men are still reluctant to openly discuss or even admit that they have fertility problems. I think it’s important for men with problems to talk about them openly, take stock of the situation, and seek help. When treating infertility, both couples must be evaluated thoroughly. Only then can treatment be tailored to each individual’s specific needs, rather than just guessing at what would work.

When it comes to the fields of women’s health care, in vitro fertilisation (IVF), and endoscopy, Akanksha Hospital and Research institute has always been a leader in innovation and technological advancement. The most cutting-edge tools and machinery in the medical industry can all be found in this facility. Any issue a lady might have can be solved by using it. Numerous Bollywood and South Indian film stars and well-known cricket players have received treatment at Akanksha Hospital.

Akanksha Hospital performs a large number of Ovarian Rejuvenation, Endometrial Rejuvenation with PRP (Platelet Rich Plasma), and BMDCC procedures (Bone Marrow-Derived Cell Concentrate). These novel treatments provide hope to women who have a damaged ovary or uterus but want to conceive using their gametes and womb. When such people conceive, Dr Niket Patel and his team of infertility doctors are overjoyed, and the patient’s feelings are beyond description.

“We have a special interest in fertility preservation, and we have assisted many patients (men and women), particularly those who get cancer at a young age and require chemotherapy and radiotherapy, which can ruin one’s fertility potential.” “We assist these patients in preserving their fertility and restoring it when they are treated,” stated Dr Niket.