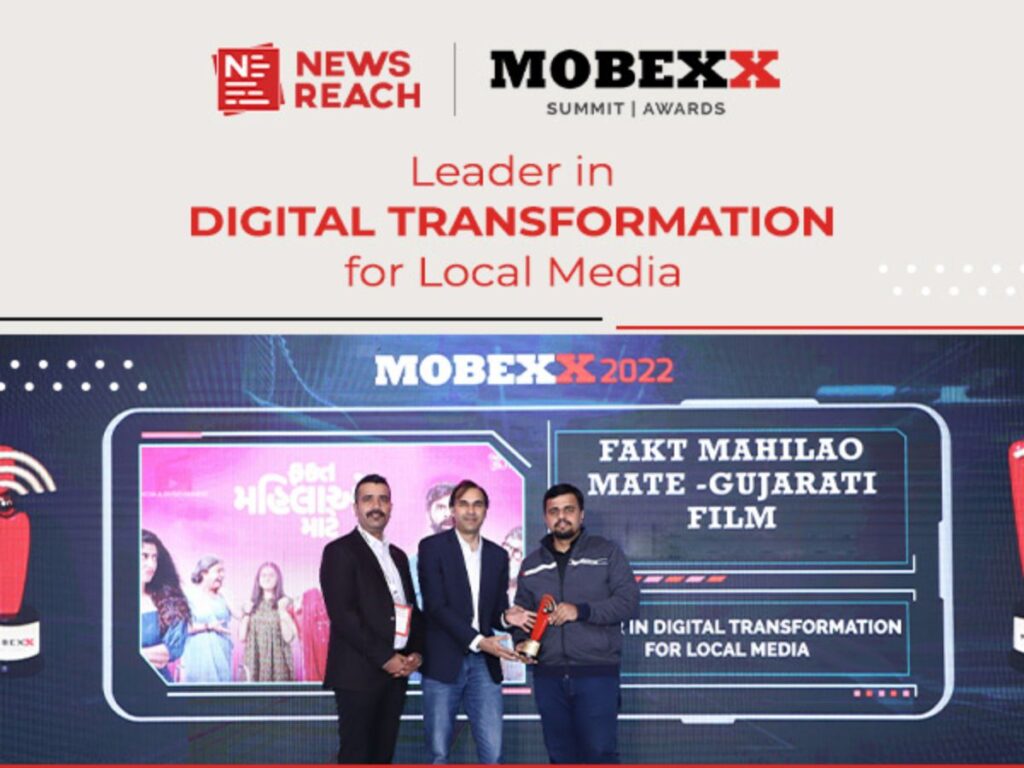 Ahmedabad (Gujarat) [India], December 20: Mobexx Awards (By Adgully) recently recognized NewsReach for their successful promotional campaign of the Gujarati movie, Fakt Mahilao Maate during an event held at Gurugram. NewsReach was chosen for its comprehensive approach to marketing and promoting the movie. The team developed an extensive strategy that included various tactics such as online advertising, influencer outreach and digital campaigns which was executed through an elaborate network of local news community founded by NewsReach.

NewsReach initiated Local News Community Program in 2022 with a vision to encourage local publishers in various parts of India who create content in vernacular languages to take a front foot and work on advancement of their publication. The result of their efforts was remarkable, with the movie managing to generate a great response from both critics and audiences alike at the local level.

Fakt Mahilao Mate is a Gujarati movie, an Indian social-comedy directed by Jay Bodas starring Yash Soni and Deeksha Joshi as lead actors and a cameo appearance by Amitabh Bachchan in the movie. The film depicts everyday drama in Gujarati society with a twitch of humour. It is women centric film, the story line of film touches upon important societal issues in entertaining way.

The promotional campaign adopted by NewsReach consisted of several elements, including various creatives, viral videos campaigns and content strategies tailored to engage different segments of the target audience. Additionally, they reached out to social media influencers in the Gujarati space to further create a hype around the release of Fakt Mahilao Maate. This ultimately drove significant viewership and positive reviews across all platforms. With the cameo by Amitabh Bachchan, the movie generated content virality. NewsReach created and marketed the content in vernacular publications associated to the Local News Community Program, the content was featured digitally to reach the maximum target audience.

NewsReach promoted the viral video of audience playing Garba in theatre while the screening of the Garba scene in a movie.  The video was promoted in many creative ways including hyper local publications to reach every district of Gujarat, this ultimately led to resharing and retweeting of content on social media. By virtue of digital promotion through multiple channels, campaign page view count crossed 750K views across the web, 2-2.5 million reaches and 80K+ engagement over social media platforms. The promotional campaign created a benchmark for future releases from regional cinema industry in India. Such fantastic results are what earned Mobexx’s recognition of NewsReach’s work on this project and made them worthy recipients of this award.

“NewsReach has revolutionized the Indian media landscape with its pioneering tech-driven, hyper local sponsored content platform. Our initiative Local News Community Program provides an opportunity for vernacular language publications to work together to generate even more localized content – further expanding their reach. The program has been met by enthusiastic response so far and we can’t wait to announce upcoming cohorts under this initiative in the coming year. The Mobexx awards recognises & celebrates the excellence in mobile marketing & advertising, and we are grateful to Adgully for giving us the industry wide recognition through this award.” – Darshan Shah– CO-FOUNDER & CEO.