Chakradhar Goud, a man brought happiness in 100 deceased families as a festival gift 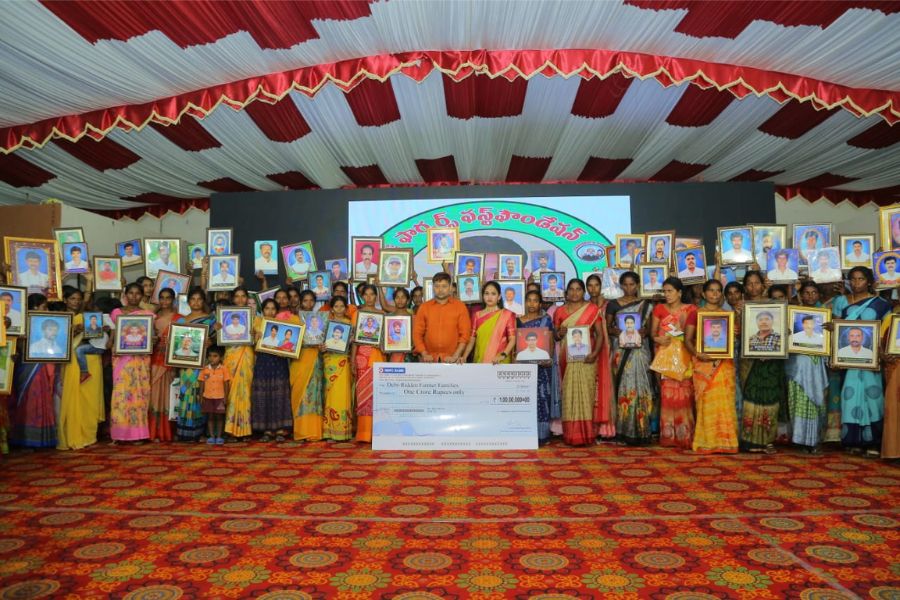 September 26: Siddipet town of Telangana witnessed a unique program named Vanda Chekkulayagnam, which means distributing 100 cheques of 1 lakh each to the families of the farmers who had committed suicide and left them in distress. Chakradhar Goud, a businessman who belongs to the same town, settled in Hyderabad a decade ago and became successful. As a part of giving back to society, he started an organization named Farmer’s first foundation. The foundation’s motto is to educate farmers and bring awareness.

A mere 100 families were selected for the event, which was in total distress and had no other go. To reduce their financial burdens, first, Chakradhar Goud distributed a cheque of 1 lakh each. They are listed and verified by team members of the farmers’ first foundation and a few experts. Most of these families are Kaulurythus, who didn’t get benefits, usually what land owners get in case of death. These 100 benefitting families belong to different districts of Telangana.

Pittala Divyakumari, a distressed farmer from Choppadandi village of Karimnagar district, who received a one lakh cheque, said her husband committed suicide by consuming poison two years ago. Since then, they have been living a helpless life. When she heard about Chakradhar’s charity event, she prayed that she should be included in the list. Now that she has got the cheque, she wants to start a small provision store in her village and secure her children’s life.

A few other instances received from the venue are as follows –

Sulochana of Bhandarupalli, a resident in Toguta Mandal, says she will start a vegetable vendor shop.

Bussabhagyalakshmi, a Mandapalli resident, says she will deposit money equally on her two children, a boy and a girl.

Kishtagari Kavitha, a beedi maker in Rudraram village of Mirdoddi Mandalam, is willing to deposit the entire money on her two years old daughter.

Swapna plans for a small shop at Narmeta village of Siddipet district. She has a son.

Nirosha of Dhanampalli, whose husband left her with two daughters, said she would set up a grocery shop in front of her house.

Chakradhar Goud chose Dussera as the season to bring back those hopes that deceased families have lost by their bygones. He has succeeded in preventing many farmers from committing suicide by extending support to shape their future. For instance, when he knew from his volunteer about a farmer in Tirupati attempting suicide, Chakradhar arrived there and extended Rs 2 lakh help to enable him to buy an autorickshaw. Now, the farmer-turned-auto-owner is leading a happy life with his family, taking care of 8 women of three generations dependent on him. Another distressed farmer rescued from suicide by Chakradhar in Hyderabad has married his daughter to a police sub-inspector.

Chakradhar Goud expressed his grief that no one is standing by those who commit suicide and turn their families into orphans. He said that if all the ineligible people accept the Rythu Bandhu scheme, they will support thousands of farmer families with the same funds. He opined that if that assurance is created among the farmers, none of the farmers will commit suicide in Telangana. Chakradhar Goud requested that the lives of the farmers in Telangana would be golden if the money could be given to genuine and qualified farmers. Political leaders, film personalities, businessmen, government employees, and NRI are all appealing to give up Rythu Bandhu.

In the last three years, Chakradhar helped 300 agricultural families that were distressed by the unnatural exit of their breadwinners from the world. Through his volunteers in the villages across Telangana, he would get the actual reasons for the Farmer’s suicide ascertained and take a decision on the kind of help to be extended to the family. From his experience, Goud realized that moral support and advice are secondary for families that are under pressure from the financiers. “They can think of tomorrow only when they are out of the stress today”, he believes.

Social Activist Ajay Nagariya: Solving The Sorrows Of The Society

The long-awaited trend in regional music is here!